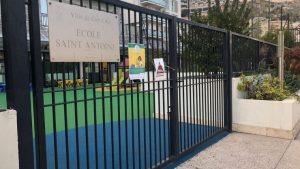 Renaming a school after the victim of an Islamist terror attack does not go over well with some. Perhaps it is considered politically incorrect. It is doubtful that an armed forces building, let alone a school, would be named Patrice Vincent, or Corporal Cirillo in Canada, much to our shame. Canadian military have named two military bases overseas after these fallen soldiers.

A nursery school was renamed Samuel Paty, in memory of the teacher who was beheaded by an Islamist on October 16, 2020 in Cap d’Ail, France. Some think it invites terrorism. That in itself is a problem. Living in fear is not an option. Being pro-active is imperative. As mayor Xavier Beck says, “the time for vigils, moments of silence is over.”

“For or against a school called Samuel Paty? The mayor Xavier Beck (LR) of Cap d’Ail has decided. Despite parents’ concerns, Saint-Antoine school took the name of the teacher assassinated in October 2020 for showing his students caricatures of Muhammad. This Friday, July 16, a plaque with his name was unveiled, in front of the teaching team and in the presence of the victim’s sister, Mickaëlle Paty. “ It is a duty and an honor to name this kindergarten Samuel Paty. His name should not be forgotten, ”explains Xavier Beck to Le Figaro .

The name change of the nursery school was voted in the city council on October 23, 2020. Only the four opposition elected officials voted against. The elected Romain Pommeret  felt that the safety of children was not taken into account. “ Religion and politics have no place in a school. Then, that would set up this school as a symbol for a terrorist, ”he argued. “ A college in Pégomas has been renamed Arnaud Beltrame. No incident was reported, “retorts Xavier Beck.

A tribute that divides

Xavier Beck already claimed his choice on France Bleu Azur in November 2020: “ We can no longer be satisfied with simple minutes of silence, moments of meditation. This Friday, he reiterates his will not to bow to the fear of terrorism. He also maintains that it is essential to salute the memory of Samuel Paty, so that “ his courage is never forgotten and so that his name remains alongside the motto of our Republic. “

A tribute which, however, is not unanimous among the parents of the students. A petition has even been launched: its signatories fear that the school will become a target for terrorists. Some even say they are considering changing their school child. Faced with this warning, the mayor deplores “ a sad agitation. “It is essential to” engrave the name of Samuel Paty everywhere , “he maintains. His approach also aims to send a strong message to teachers, he says: “ All teachers, no matter whether they are in a school, college or high school, must be able to teach their subject without fear. “

The mayor of Cap d’Ail is not the first to want to honor the memory of Samuel Paty. In January 2021, in the Var, the mayor LR of Ollioules wanted to rename the college “ Les Eucalyptus ” located in his town. ” It is for me a strong symbol of the Republic ” explained the mayor Robert Beneventi to France Bleu . But faced with the challenge of parents and students, the project was buried. In other cities, the tribute did not create controversy.

Xavier Beck is convinced of the merits of his decision. ” Municipalities like Villeneuve-Loubet or Cannet-Rocheville have announced their intention to rename an educational establishment Samuel Paty ” . Others will follow, ” he wants to believe . In Béziers, a city headed by Robert Ménard, the city council voted unanimously in November 2020 to rename the school of the “Oliviers” school group in homage to Samuel Paty. Other projects are on the table, such as Boulazac-Isle-Manoire, in the Dordogne.”