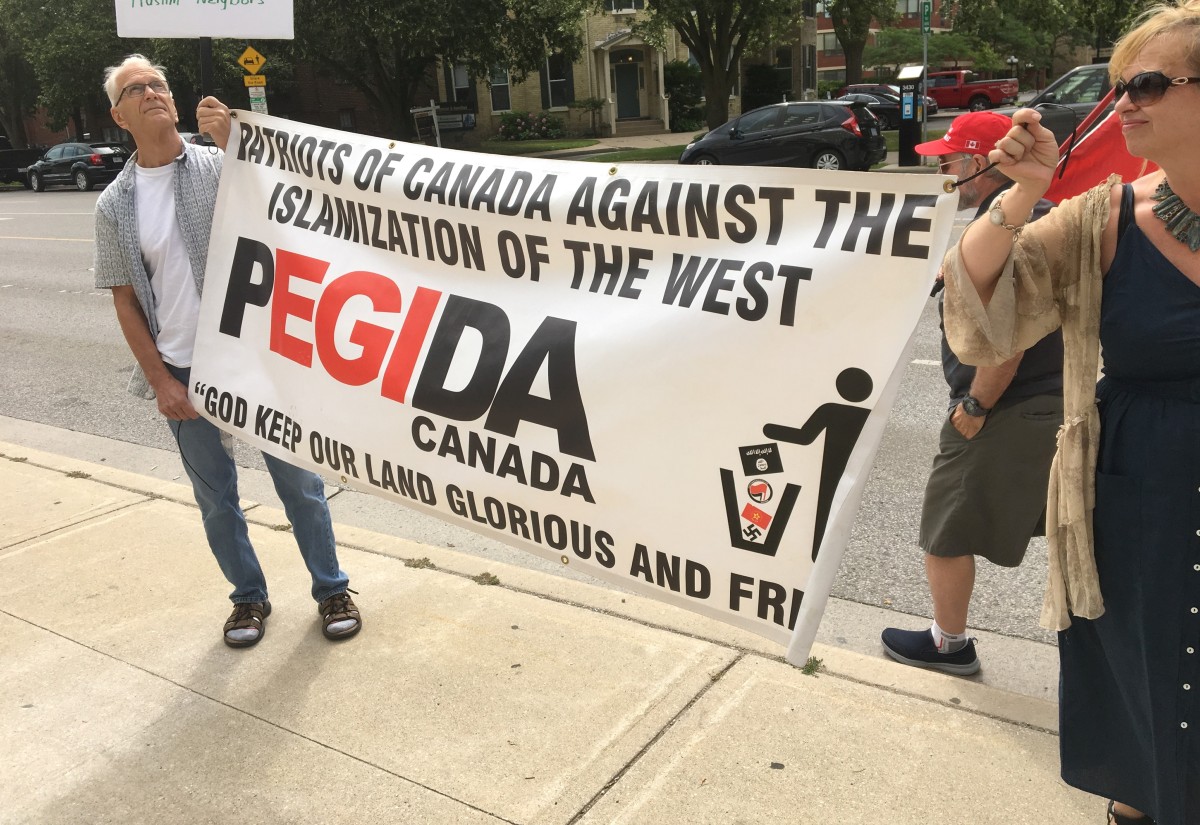 I will start out by saying I think flash rallies are the way to go. No, you don’t get the general public out, as you don’t advertise, but you certainly are able to talk to passersby. Yesterday was no exception.

We spoke in front of city hall in London, Ontario once again. Our subject matter was similar to previous rallies, but this time, there was information specific to local council. The video and transcript is below.

One interesting conversation was had with a Muslim gentleman, an attendee of London Muslim mosque. He agreed with us in principle, but was defensive about his mosque, saying they were not radical. I had to disagree with him on this point, as they regularly have radical imams as guest speakers. He was not willing to go on camera with his views.

We got a few ‘racists’ comments, but again, the general reception for our message was good. 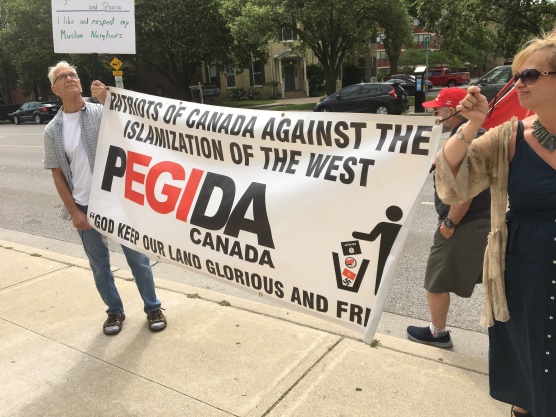 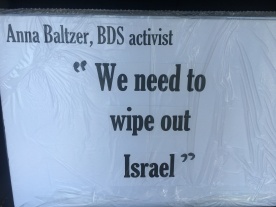 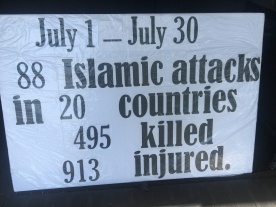 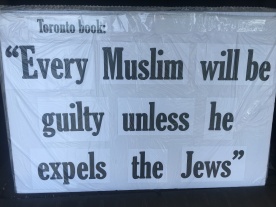 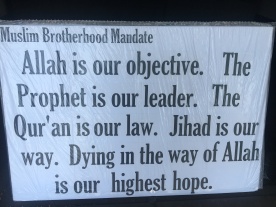 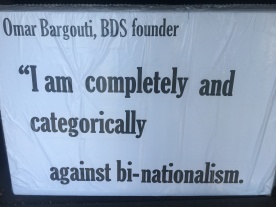 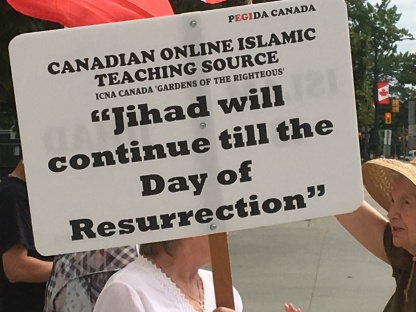 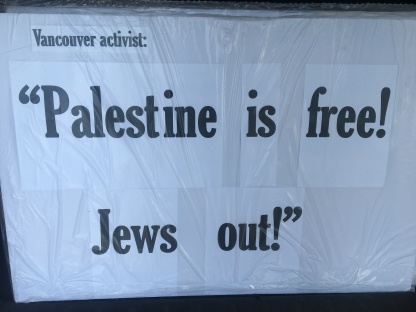 Today I am going to talk about a few things that we believe are very concerning and are connected directly to London and its local government.

As you are aware, Pegida Canada was and is voraciously fought against since we started rallying here. It was always a puzzle to me why the city was so dead set against us. We have met with councillors, we have explained our viewpoint, we have provided information. Yet the city still refuses to apologize for its treatment of our organization.

What I am going to talk about will perhaps shed some light on why this is.

I first want to talk about the Muslim Brotherhood. The Muslim Brotherhood was founded in the 1920s by the Egyptian cleric Hassan Al-Banna, whose writings were hostile to the West and envisioned its downfall, proposing instead a “world living under the tranquility of Islam.” To achieve this, he called for reforms that included mandatory memorization of the Koran in schools, igniting “the spirit of Islamic jihad” in youths, censorship of music and films, and confiscation of books and newspapers.

Today, the Muslim Brotherhood is banned in many countries, including it’s country of origin, Egypt. In Canada, it is active under many different names. The International Relief Fund for the Afflicted and Needy — Canada (IRFAN) had been placed on Ottawa’s list of banned terrorist groups. According to the Canada Revenue Agency, IRFAN had merged with the Jerusalem Fund for Human Services, which was allegedly set up by a Muslim Brotherhood committee. IRFAN had funnelled $15-million to groups linked to the terrorist group Hamas, the Muslim Brotherhood’s Palestinian branch. Hamas declares in its charter that they are the Palestinian arm of the Muslim Brotherhood. IRFAN was a registered charity at the time but has since had its status revoked. IRFAN denies knowingly funding Hamas.

The Muslim students association, a group with a pro-Palestinian, anti-Zionist agenda, is another arm of the Muslim Brotherhood. This organization is active throughout colleges and universities throughout North America, including here in London.

The Muslim Brotherhood’s creed is self explanatory in what they believe and strive for.

“Allah is our objective. The Prophet is our leader. Qur’an is our law. Jihad is our way. Dying in the way of Allah is our highest hope.”

The pledge of the Muslim Students Association is practically identical. This is their pledge

“Allah is my lord.

Islam is my life.

The Koran is my guide.

The Sunna is my practice.

Jihad is my spirit.

Righteousness is my character.

Paradise is my goal.

I enjoin what is right.

I forbid what is wrong.

I will fight against oppression.

And I will die to establish Islam.”

Keep in mind, this organization is present in our colleges and universities. In 2015, the book “Women in Islam & Refutation of some Common Misconceptions,” authored by the Saudi scholar Dr. Abdul-Rahman al-Sheha was distributed during Islam Awareness Week in one of our universities. I mention this particular case, because we picked up this book in York University. Following is a quote from this book:
” Although beating of women is generally forbidden, Islam permits the beating of wives in a restricted and limited sense only as a final solution and acceptable valid reason when all else fails. This is analogous to spanking children when all else fails and they must learn a lesson in obedience for their own protection and success.”

Nine Canadian politicians are said to be named as having signed letters of support for projects to further the Muslim Brotherhood in Canada, one of these politicians a sitting member of the Cabinet and others that include city council members from both Toronto and London.

The name of this former senior council member has not yet been revealed, but the fact that someone in this building was supportive of Islamist activities is concerning indeed.  This also explains the strong reaction of city hall against us when we started to rally in 2017. The council member that supports Muslim Brotherhood was at that time still on council, and this is what Pegida Canada warns against, namely Islamism.

I will speak now about the BDS organization. BDS stands for Boycott, Divestment and Sanctions. This is a Pro Palestine/anti Israel initiative that is intent on the destruction of Israel. Apologists will tell you it was set up to help the Palestinians, by basically destroying Israel’s economy,  but activists are quite clear in their desire to eradicate Israel. The BDS movement is nothing less than a form of economic warfare against Israel meant to destroy the Jewish state. Read or listen to any prominent BDS supporter and this truth becomes painfully obvious. One of the founders of this organization has this to say. (sign) This is a quote from a Vancouver activist (sign) and this is a quote from a prominent American activist. (sign)

Notorious American antisemitic congresswoman Ilhan Omar is well known for her support of BDS, as are several of her contemporaries.

Across the country, you find stickers on Israeli products in grocery stores telling people not to purchase Israeli goods. A prominent BDS Toronto activist posted on his facebook page encouragement to do this. This is vandalism and vandalism is a criminal offence.

Toronto has a large contingent of these anti-Semites, as does London, many of them coming out to oppose us when we rally.

Hamas leaders have expressed deep satisfaction with the work of the BDS activists around the world. Hamas is convinced that the anti-Israel campaign will ultimately pave the way for the elimination of Israel.

The Trudeau government has denounced the BDS, and rightfully so, (one of the few times I agree with them), as Canada is a supporter of the state of Israel.

So, how does this connect to city hall? Well, we have a current sitting city councilor who has given their support for the BDS organization through their activities in their political party. This is another possible reason for the resistance of city hall to issue an apology to our organization, because we speak out against BDS.

So it appears that we have had supporters of radicalism on London city council, we have anti Israel activists on London city council. We have a city council that is actively involved in the local mosque, a mosque the regularly has guest Imams with radical ideas. Ideas that include armed jihad, anti Semitism the subjugation of women to name a few.

What is interesting is that London Muslim mosque is teaching a summer course on Surah Al Nur, the 24th chapter in the Quran. Surah Al Nur is one of the  chapters in the Qur’an that deals with purity, or rather the lack thereof.

The fact that it deals with purity is not in and of itself a problem. There is nothing wrong with desiring purity. In this chapter, we see the instruction for sharia punishment in the event of unchastity.

Verse two of this chapter reads as follows:

“The [unmarried] woman or [unmarried] man found guilty of sexual intercourse lash each one of them with a hundred lashes, and do not be taken by pity for them in the religion [i.e., law] of Allah, if you should believe in Allah and the Last Day. And let a group of the believers witness their punishment.”

This translation is from Sahih International, the same translation of the Qur’an that is given out freely from Dawah booths across Canada and throughout other Western countries.

What is also interesting is the modern commentary that accompanies this verse.

The following  footnote that accompany this verse in this particular translation says: (sign)

Keep in mind, this is a ‘modern’ footnote, so the readers will understand what the quran is saying.

It would be interesting to see how London Muslim mosque teaches this chapter, particularly since they regularly invite guest imams with distinctly radical views. Perhaps they will take a more moderate approach.

Islamism is alive a well, as it were, in Canada. In London. That is what we warn about. And city council fights us on this.

Have a good hard look at your council, London. Ask questions. Educate yourselves. We do what we can to combat this, but it really is up to the public to make noise.

And this is a bitchute version for those who do not subscribe to facebook. Youtube have us on suspension because we posted a video that exposed antisemitism in the Islamic community.